Dean Boyce is a retired journalist who was born and raised in South Australia. He has worked abroad, in Fleet Street newspapers and at the BBC, and in Sydney at The Australian, The National Times, and the Sydney Morning Herald. During his last decade working in newspapers he specialised in the then changing pre-press technology, on which he wrote a number of booklets and training manuals.
While in Europe he travelled widely and spent a year in Italy, studying at the University of Perugia, and teaching English. He has always had a keen interest in Australian history (he is a graduate of Sydney University, where he majored in history and art history and theory).
This book is his first, published in 1970. In recent years he has written two other books and a commissioned article for the Dictionary of Sydney. He also had a part-time formal education in art and continues this interest. (His own sketches illustrate this book.) 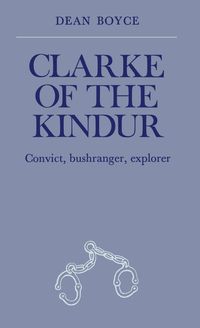 Clarke of the KindurDean Boyce
Ebook$18.99 Clarke of the KindurDean Boyce
Paperback$29.99
Free shipping
on orders over $50
Get 10% off
when you sign up as a member
Buy now from Australia's
Oldest university press
