Read Anthony Albanese's chapter from WHAT HAPPENS NEXT?

WHAT HAPPENS NEXT? sets out a progressive, reforming agenda to tackle the twin crises of climate change and inequality. It provides a framework through which our collective effort can be devoted to improving the lives of all Australians, and the sustainability of the world in which we live. 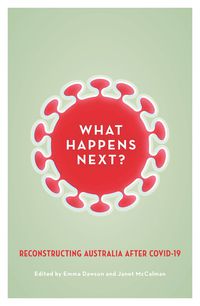 Infrastructure and investment for the reconstruction

Governments at all levels must choose their path wisely. Seeking to simply restore our country to the state it was in before the pandemic will not be enough. We must deploy strategic investment, alongside creativity, to make Australia a fairer, more prosperous and resilient nation. Infrastructure investment must be at the heart of this recovery strategy, as has often been the case over the course of Australia’s history. In times of national hardship, it has been government that has led the way.

In the midst of World War II, John Curtin established the Department of Post-War Reconstruction, this led to large-scale investment in new industries such as car manufacturing, new infrastructure for irrigation and hydro-electric power.

In 1983, faced with high unemployment and rampant inflation, the Hawke Government’s Prices and Incomes Accord transformed a moribund economy, compensating workers for restraint in wage claims with a ‘social wage’ in Medicare, improved welfare payments and investment in education.

As countries around the world struggled to cope with the economic devastation wrought by the global financial crisis, the Rudd Government provided a comprehensive response that included major rail and road projects, community infrastructure provided through local government, investment in social housing, construction of what was intended to be a world-class national broadband network, and upgraded facilities at schools right across Australia. As the infrastructure and transport minister in that government, I oversaw investment in our nation’s rail and road network that was aimed at bringing people together, making travel safer and improving logistics while providing good, secure jobs. Overall, we more than doubled annual federal infrastructure spending from $132 to $265 per Australian, taking the nation from twentieth out of twenty-five OECD countries to first when it came to investment in public infrastructure as a proportion of national income.

This time, too, stimulus through economic and social infrastructure will be critical to the recovery. COVID-19 has shown us the importance of essential infrastructure. Without the Labor Government’s investment in communications infrastructure— including the NBN, however flawed the rollout after 2013— Australians may not have been able to adapt so quickly to working and studying from home. Similarly, the success of our freight and logistics networks during this time demonstrates their essential role in national security. As we look towards the future, we must aspire to truly improve the lot of the nation.

Australia is one of the most urbanised countries in the OECD, but rapid growth in population, combined with inadequate planning, has left people in our fast-growing outer suburbs facing few local employment opportunities, lengthy commutes to their places of work, poor access to public transport, and insufficient public facilities such as parks and sporting fields.

Early research from the National Growth Areas Alliance shows that these growth areas will likely be hit particularly hard by the economic effects of COVID-19, with up to 424,000 people unemployed. More than 330,000 of Australia’s most vulnerable small businesses (those with fewer than twenty employees) operate in growth areas. What is more, sixteen of the top twenty postcodes suffering mortgage stress are in these same regions.

Our regional centres, which have largely escaped the worst health effects of COVID-19, are also suffering. The situation has been compounded by a complete lack of vision about regional Australia’s potential from government since 2013. A number of these communities, particularly across the south coast and northern parts of New South Wales, southern Queensland and the east coast of Victoria, have also been hit by drought and bushfires, let down by a government that was too slow to respond to either challenge and can’t reach agreement when it comes to action on climate change.

Yet even before the bushfires and COVID-19, Australia’s economy was weak. Growth was below trend and repeatedly downgraded, living standards were flatlining, wages were stagnant, and productivity was sliding backwards. Both business investment and consumer confidence were in decline, and unemployment was stuck above that of comparable economies, with almost 2 million Australians either unemployed or underemployed. Public debt at the time of the 2019 Mid-Year Economic and Fiscal Outlook stood at over $556 billion, with little public investment to show in return. The government had no plan for the economy, and it still doesn’t have an effective one now.

In contrast, Labor has always had a plan for Australia’s economic future, even in the most challenging times. Already we are working on our vision for what the nation should look like post COVID-19. We know that ensuring ongoing resilience in communities, and supporting them beyond the recovery phase, will require a focus on catching up those areas that need it the most: our outer suburbs and regional centres.

Social and economic infrastructure must be at the heart of any plan to build resilience at a community level. From investment in roads and hospitals, to recreational space and public transport, bike paths and social housing—these projects will stimulate the economy while making our suburbs and regional towns even better places to live, work and raise a family.

We must prioritise decent and secure jobs. At the most basic level, this means employing locals and providing apprentices with training opportunities throughout the construction phase of new stimulus projects. At a strategic level, governments must collaborate with each other, with superannuation funds and with the private sector to map new job creation through investment in advanced manufacturing, our health and social services system, and other identified priority areas. In many outer suburbs and regional centres, innovative projects are already underway that in some cases will support hundreds, if not thousands, of workers.

In regional Queensland, Downer’s Maryborough facility employs more than 250 people, including thirty apprentices. This train manufacturing plant has been charged with bringing Queensland’s New Generation Rollingstock up to standard, after they were originally built in India and failed to meet Australian disability access standards. Supporting rail manufacturing in Australia presents a real opportunity, and not just in terms of increasing the number of local jobs. The Commonwealth can deliver coordinated procurement across states and territories, and, with the private sector, smooth out production, reduce costs and build skills and capability.

Ultimately, the experience of working from home in recent months has given a practical insight into how many businesses could improve their cost structures and productivity by moving to regional cities and towns. For many, the location and nature of their work will have changed forever, with the potential to increase productivity and decrease urban congestion. An appropriate decentralisation strategy that boosts regional economic development and takes pressure off our capital cities should be at the heart of national economic development.

There is another great economic story in our regions, with our resource and agricultural producers at the helm of the devel- opment, design and application of artificial intelligence, drone technologies and genetics. One project in particular has the ability to unlock the potential of regional Australia, which the current government refuses to consider despite the presence of supporters in its ranks. High-speed rail, for which I have long been an advo- cate, would be an economic game changer, particularly for those communities along its path, including the Gold Coast, Grafton, Coffs Harbour, Port Macquarie, Newcastle, the Central Coast, Southern Highlands, Canberra, Wagga Wagga and Shepparton.

As we look to modernise our energy infrastructure, we can create new jobs throughout our economy and capitalise on Australia’s huge potential as a renewable energy superpower.

In doing so, we should remember the important regional dimen- sions of this change. Given that our renewable energy sources are largely based in the regions, investment in this industry naturally favours regional job creation. The University of Technology Sydney recently analysed the job opportunities associated with strong renewables investment and concluded that more than 60 per cent of new renewable jobs in Queensland, New South Wales, Victoria and Tasmania resulting from a supportive national policy would be located in regional Australia.

This is an edited extract from WHAT HAPPENS NEXT? edited by Emma Dawson and Janet McCalman. Available now.

✉
Posted on 13 May 2022 under Politics and Current Affairs Emma Dawson is the executive director of Per Capita. Formerly, she was a senior advisor on sustainability and inclusion at Telstra, executive director of the Institute for a Broadband Enabled Society, University of Melbourne, and a senior policy advisor in the Rudd and Gillard governments. Dawson has published articles on public policy and social affairs in academic journals and the mainstream press, and is a regular panellist on The Drum on ABC TV. She is… What Happens Next?Emma Dawson, Janet McCalman
Paperback
$32.99
Free shipping
on orders over $50
Get 10% off
when you sign up as a member
Buy now from Australia's
Oldest university press
