On March 5th we launched The Colonial Kangaroo Hunt by Ken Gelder and Rachael Weaver at the University of Melbourne. From the arrival of Captain James Cook in 1770 to classic children's tale Dot and the Kangaroo, Gelder and Weaver examine hunting narratives in novels, visual art and memoirs to discover how the kangaroo became a favourite quarry, a relished food source, an object of scientific fascination, and a source of violent conflict between settlers and Aboriginal people.

Below is a transcript of the launch speech delivered by Justin Clemens, Associate Professor in the School of Culture and Communication.

I have been asked to keep this talk to 15 minutes max, but I don’t know if I can — not least because to do justice to this book would require much much longer. But as academics we are all professional non-listeners, so if you have any objections, I humbly ask you to practice your vocation and switch yourselves off now.

The elegant and precise title says what this book does: The Colonial Kangaroo Hunt. It spans the crucial period of British colonialism in Australia from Captain Cook until the late 19th century. It draws on a remarkable range of archival materials, from poems, journals, novels, scientific accounts, sketches, engravings, to paintings, both indigenous and European, and much much more.

Rather than extensively discuss the book itself — no spoilers here, and, of course, you should of course all purchase at least one copy for yourselves to read closely — I want to sketch some of the determining aspects of its anthropological background. After all, hunting is not just one theme among others.

A few years ago I was listening to a podcast by an eminent French paleoanthropologist about the evolution of early humans, a brilliant 10-part series which emphasized the cultural and environmental pressures on evolution as much as the supposedly strictly biological aspects of homo sapiens sapiens. I was very struck by the lines: ‘It’s often said that humans walked out of Africa. This is false. We ran out of Africa.’ Now it seems that many physical traits can be shared by predators and prey, hunters and hunted, and so there are often many puzzles for palaeontologists about how to interpret the usually partial and mutilated remains they uncover. Hence the question: when we ran out of Africa, were we being chased? As you might expect, given our current obsessions with the Anthropocene, it turns out no. We ran out of Africa killing everything we met on the way.

So hunting turns out to be at the very centre of human development and expansion, encompassing tracking, tricking, trapping, troping, and so forth. The origins of technology seem primarily to be hunting technologies, a feature not forgotten by the most eminent metaphysicians. As Reiner Schürmann comments in his unfinished masterwork Broken Hegemonies, ‘The two words [Martin] Heidegger uses to describe contemporary technology, Machenschaft and Gestell, connote tracking down prey and the hunting trap.’ Naturally, humans never simply ‘hunt animals,’ but, in doing so, deploy techniques that simultaneously establish and confound the differences between beasts and men. To transform humans into beasts and beasts into prey is certainly one primordial cultural operation, but such an operation not only renders beasts objects to be killed for self-protection, land, food, clothing or sport, but sometimes even as domesticated accomplices in the hunting of other animals: hawks and horses and hounds, games of breeding for killing and domination. From the Biblical Nimrod, ‘Mighty Hunter before the Lord,’ who, though the Bible itself does not specify, the tradition does — men not beasts were his game — to the drones and manhunts of contemporary geopolitics or the contemporary sci-fi entertainments of the Predator franchise, in which a high-tech Cthulu-like alien hunts humans for sport, nothing says ‘human’ like a fun-loving murder-machine.

We also shouldn’t forget that the etymology of ‘paradise’ seems to go back to the Emperor’s hunting garden. Adam in Eden is given dominion over all other creatures. Those who wish to be masters inevitably put hunting at the very centre of their entertainments. Think of the incredible Assyrian friezes, now in the possession of the British Museum, in which Ashurbanipal slaughters numerous lions. Apparently the lifespan of an average nobleman at the court of the Sun King was shorter than that of a peasant; for, after carousing all night, the unfortunate Duke would have to get up at the crack of dawn to go hunting with his lord: so many hungover men falling off horses, or shooting each other in the back. You’ll no doubt recall that US VP Dick Cheney accidentally injured his friend Harry Whittington with a shotgun while quail shooting in 2006; Whittington famously apologized on TV to Cheney about the incident. Or take the Trump Jrs enthusiasm for killing beasts in Africa and Alaska, or the recent scandal over the Crown Casino high rollers who were taken to shoot wombats.

And, funnily enough, the eternal recurrence of such atavisms have also always been integrated with narratives of ethical and political improvement. W.H. Auden invokes this tradition in his great early poem ‘Our Hunting Fathers’:

Our hunting fathers told the story

Of the sadness of the creatures,

Pitied the limits and the lack

Set in their finished features;

Saw in the lion’s intolerant look

Behind the quarry’s dying glare

Love raging for the personal glory

That reason’s gift would add,

The liberal appetite and power,

The rightness of a god.

So this book picks up on these entangled world-historical interests of homo sapiens — hunting everything; developing killing, breeding and training technologies; political domination; territorial appropriation; environmental devastation; and narratologically-enhanced ethical self-regard — in a local context. Ken and Rachael quote John MacKenzie’s Empire of Nature: ‘the colonial frontier was also a hunting frontier’ (Cited 153). To which they immediately add: ‘Hunting game in India, Africa, North America and elsewhere was always, of course, an active and brutal expression of settler domination over species and territory.’ Yet the local context and specific prey, the Kangaroo, illuminates something essential about the state of the Australian colonial situation that nothing else quite does. Roo hunting is not just one instance among others of deleterious, odd, yet significant colonial practices — which we could identify, adduce, compare and contrast, in the reconstruction of that ongoing history — but an absolutely determining, revelatory and insistent phenomenon that defines British Australian culture from the mid-18th century to the present.

It’s worth noting too that Ken and Rachael are among the most eminent Australianists of the 21st century, authors of many important books and articles, both together and apart. With Denise Varney, Ken was co-director of the Australia Centre; with Paul Salzman, Ken has co-authored two Australian literary histories; with Jane Jacobs, the monograph Uncanny Australia; and much, much more on popular culture, film and fiction. I have personally known Rachael now for over 30 years, but I would be hard pressed to recall when I first twigged she had become such an eminent Australianist: perhaps it was with her first book, the creepy Criminal of the Century, a terrifying true crime thriller monograph, although she has also authored papers on many subjects, including William Gosse Hay. Together, Ken and Rachael write as nobody else I know or know of does and can: as Georges Braque famously said of his development of Cubism with Pablo Picasso, they work like mountaineers roped together. They have co-edited very many volumes of colonial fiction, and co-authored books on such matters as colonial character types.

As you’d expect from such accomplished scholar-writers, the book is impeccably researched, perspicuously written, continuously informative, and horribly entertaining. The characteristic irony of the authors is evident throughout. It’s full of great anecdotes: the first attested shooting of a kangaroo was on 14 July 1770, by the appropriately-named Lieutenant John Gore, 3rd in command of the Endeavour, notorious man-killer and renowned hunter. The shooting and naming of the species are of course closely coupled. Colonial killing is simultaneously done for fun, for food, for fatherland, for farthings — and for science. As our authors relate:

shooting the kangaroo is the first in a chain of reactions to species that works to secure colonisation in the New World: skinning, butchering, cooking, preserving and eating; but also culling, clearing, managing and trading; and scientifically recording, dissecting, classifying and stuffing (taxidermy); and producing along the way an immense amount of commentary, a great many sketches, poems and novels, and a number of significant works of art (5).

Perhaps more so than all the other biological oddities Australia had to offer — the black swan, the platypus, the koala, the banksia, — the discovery of the kangaroo immediately incited indecent excitement across Europe, capturing the imaginations of a wide range of Euro-Enlightenment gents. By August 1773, Boswell relates, that the gargantuan shambolic, scrofulous Dr Johnson was entertaining dinner-parties in Inverness by imitating the movements of the Kangaroo. Think of the hilarious ‘Botany Bay Eclogue’ by Bob Southey, in which we hear, rather than bleating flocks of Olde England, ‘the Kangaroo’s sad note’; or the rather less bathetic The Kangaroo Hunt by Charles Hzarpur. Then there are the 1770 sketches of Sydney Parkinson, or George Stubbs’ famous 1770 painting, or Arthur Bowes Smyth’s Kangooroo of 1788-89, John Hunter’s sweetly leaning Kang-oo-roo (c. 1788), Sarah Stone’s notoriously stony Kangaroo of 1790, the scenes of Aborigines hunting kangaroos by fire by Joseph Lycett and so on and on. A defenceless little roo even squeaks into the minatory work by Benjamin Duterrau, The Conciliation (1840). And you will have to read the book for its incisive analyses of the kangaroo hunt novels and fantasies. (The book itself is beautifully produced, with a large number of full-colour images.)

So The Colonial Kangaroo Hunt is, to repeat, not just a study of antiquarian or anecdotal interest, nor merely a bravura archival reconstruction of an under-appreciated historical theme: rather, it is a powerful contemporary exhumation of key tactics and techniques of colonialism in a place, Australia, that, despite being an apparently minor concern in and for modern history, is rather at once absolutely singular and absolutely revelatory of colonialism on a planetary scale.

But let me finish with a handy hint. One of my friend’s ex-partner’s sisters is a professional roo-shooter: she goes out in a chopper to pick them off. This is because, as one evolutionary just-so story goes, their ancestors never had to worry about terror from the air. Not only can’t kangaroos walk backwards, they can’t look up. As a result, you can calmly shoot them from above. They do indeed see their friends and family dying, but can’t see the source of the threat, and hence often don’t even try to flee. If civilization collapses from climate change or a coronavirus pandemic, and you’re out there starving, clutching your hoarded toilet paper in one hand and shotgun in the other, never forget: kill them from above. 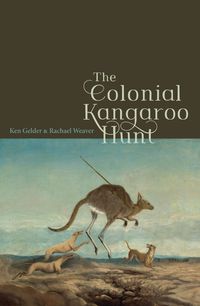 The Colonial Kangaroo HuntKen Gelder, Rachael Weaver
Paperback
$39.99
Free shipping
on orders over $50
Get 10% off
when you sign up as a member
Buy now from Australia's
Oldest university press
