Who was William Guilfoyle?

The long overdue celebration of William Guilfoyle, the botanist.

Enter the world of William Guilfoyle: the intrepid ‘plant hunter’ responsible for the transformation of Melbourne’s Botanic Gardens into one of the world’s most spectacular botanical landscapes.

The great William Guilfoyle, credited as the architect of Melbourne's Royal Botanic gardens, was an eminent landscape designer, botanist and writer.

In Shakespearian Botany, we experience Guilofyle as a plant enthusiast, as a thinker, and even as a scientist—in his thirty-five years at Melbourne's Botanic Gardens, Guilfoyle amassed a systematic collection of many thousands of plant species from all over the world.

William Robert Guilfoyle is most often introduced in apposition to Sir Ferdinand Jakob Heinrich von Mueller. Guilfoyle was the gifted garden designer of course, but also the supplanter in 1873 of Sir Ferdinand as Director of Melbourne’s Botanic Gardens. That’s von Mueller, the greatly titled and brilliant scientist but rather ordinary landscaper. Von Mueller’s imposing life and mind have been revealed through his publications, and more recently his diaries. Guilfoyle, to many, has remained a lightly sketched character in the shadows of Victorian gardens and botanical history. 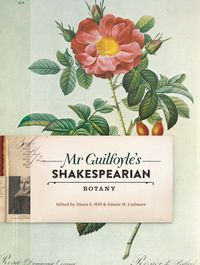 Here, at last, we experience Guilfoyle as a plant enthusiast, as a thinker, and even as a scientist, albeit more of an enthusiastic amateur than you know who. In the thirty-five years it took him to transform Melbourne’s Botanic Gardens into one of the world’s spectacular botanical landscapes, Guilfoyle also amassed a systematic collection of many thousands of plant species from all over the world. His evolving creation—now the Melbourne Gardens of Royal Botanic Gardens Victoria—is part landscape masterpiece and part living botanical collection.

Guilfoyle gained experience working beside his father Michael Guilfoyle at their Exotic Nursery in Double Bay, Sydney. His aesthetic and artistic flair enabled him to convert the orderly but uninspiring plantings of the Melbourne Botanic Gardens into his famous balance of mass and void. He also blended rich plant diversity with landscape design. Step into his botanic garden, or one of his regional Victorian gardens, and you’ll see beauty first. Look a little closer though and Guilfoyle the plantsman, the botanist, is there to be discovered.

By the time Guilfoyle was travelling to Europe, later in his tenure, he was confident enough to praise and to criticise some of the world’s most revered gardens (detailed in the second book in this trilogy, Mr Guilfoyle’s Honeymoon: The Gardens of  Europe & Great Britain). He relishes teasing apart design and diversity. Guilfoyle clearly knows his plants, and how to use them best in the garden.

Here, when writing of Shakespeare, and claiming the Bard as a botanist, he does so from the comfortable position of being one himself. His approach to the exposition of Shakespearian plants is in the style of plant guide or even ethnobotanist. All this is far from the enthusiastic but inexperienced landscaper who arrived in Melbourne in 1873, and far from the popular perception of Guilfoyle as almost the opposite of the mighty von Mueller.

I should not have been as surprised as I was about the depth of his expertise and interest in plants. After all, in 1874, only a year after he started work in Melbourne, he published a book on Australian botany, and throughout his life he published pamphlets and books on various aspects of plants. As we learn in the third of these three fascinating volumes, Mr Guilfoyle’s South Sea Islands Adventure on HMS Challenger, Guilfoyle travelled and collected plants in the South Pacific before he took up his post in Melbourne. His travels and interest in Shakespeare provided a further opportunity to write about the things he valued so greatly, plants.

The editors of these gorgeously executed publications, Diana E. Hill and Edmée H. Cudmore, describe Guilfoyle as a ‘plant hunter’. Indeed, as a 28-year-old, armed with twelve Wardian cases, he hunted down and collected plants from the Pacific Islands for Sydney’s Botanic Gardens. Around the same time, von Mueller—before Guilfoyle became a rival for his job—proposed Guilfoyle as a Fellow of the esteemed Linnean Society of London, a select assembly of botanists and zoologists.

I need say no more: I am delighted to support this long overdue celebration of William Guilfoyle, the botanist.