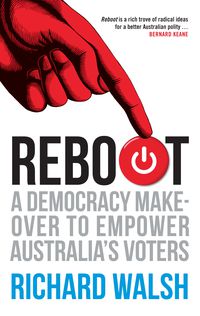 If you want real change, change the system. Reboot offers a tantalising glimpse of a better future, where politicians work directly and closely with those who voted for them.

Utopian? Disillusional? Richard Walsh makes a tour de force argument for doing away with the senate, embracing a republic and having a government where the prime minister and ministers are the best people in the country, not just chosen from the politicians who sit in the parliament.

Richard Walsh was co-editor of OZ magazine in the 1960s and editor of Nation Review in the 1970s. He has been managing director of Angus & Robertson Publishers, chief executive of Australian Consolidated Press and is currently a commissioning publisher at Allen & Unwin. He has written for both television and the stage; this is his ninth book.

This is a ticketed event. For bookings click here.