A.A. (Arthur Angell) Phillips was born in Melbourne in 1900 and died in 1985. He was educated at the Universities of Melbourne and Oxford, and was a schoolmaster at Wesley College, Melbourne. He published several books of criticism, including The Australian Tradition, and had a long association with Meanjin, in which his article about the cultural cringe first appeared. 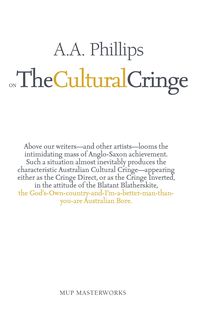 On The Cultural CringeA.A. Phillips
Ebook$9.99 On The Cultural CringeA.A. Phillips
Paperback$14.99
Free shipping
on orders over $50
Get 10% off
when you sign up as a member
Buy now from Australia's
Oldest university press
