Alfred Hart (1870-1950), scientist, educator and Shakespearean scholar, was born on 5 December 1870 on a farm in Cedar County, Iowa, United States of America, son of Frederick Hart, farmer, and his wife Ellen, née Latham; his parents were on a visit from Birmingham, England, and shortly returned there. Alfred arrived at Melbourne with his father, brother and sister in September 1879. He won a scholarship to Melbourne Church of England Grammar School in 1884, carrying off the Agar Wynne prizes for Latin in 1885 and Greek in 1886. 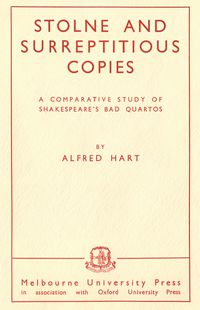 Stolne and Surreptitious CopiesAlfred Hart
Paperback$39.99
Free shipping
on orders over $50
Get 10% off
when you sign up as a member
Buy now from Australia's
Oldest university press
