Professor Donald Horne AO was born in Muswellbrook, New South Wales, and educated at the University of Sydney. After a career in journalism, he joined the academic staff of the political science department at the University of New South Wales, rising to head of department. He was Chair of the Australia Council from 1985 to 1990. His books include The Lucky Country, Death of the Lucky Country, Time of Hope, The Next Australia and The Education of Young Donald.

On How I Came To Write 'the Lucky Country'Donald Horne
Ebook$9.99 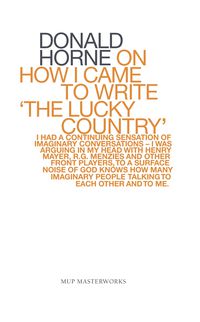 On How I Came To Write 'the Lucky Country'Donald Horne
Paperback$14.99
Free shipping
on orders over $50
Get 10% off
when you sign up as a member
Buy now from Australia's
Oldest university press
