Libby Robin is a prize-winning author of 16 books including How a Continent Created a Nation (2007, UNSW Press, winner of the NSW Premier’s Prize for Australian History), The Flight of the Emu (2001, MUP, winner of the Victorian Premier’s inaugural Literary Prize for Science Writing in 2003) and (with others) Boom and Bust: Bird Stories for a Dry Country (2009, CSIRO Publishing, winner of the Whitley Medal, Australian Museum).

She is Professor at the Fenner School of Environment and Society, Australian National University and was elected Fellow of the Australian Academy of Humanities in 2013. She has also worked for many years as a senior research fellow at the National Museum of Australia, and with international museums including the Deutsches Museum, Munich, Germany. Many of her published papers deal with the rise of conservation activism in Australia and internationally. Her most important book on the subject of Australia’s environmental activism is Defending the Little Desert: The Rise of Ecological Consciousness in Australia. 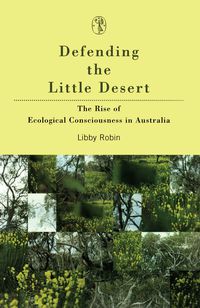 Defending The Little DesertLibby Robin
Paperback$27.99
Free shipping
on orders over $50
Get 10% off
when you sign up as a member
Buy now from Australia's
Oldest university press
