Maxine McKew is an Hon Fellow of the Melbourne Graduate School of Education at the University of Melbourne. Class Act is her second book, following the success of her political memoir, Tales from the Political Trenches, published in 2012. Maxine's background is in journalism and politics. For many years she was a familiar face on ABC TV and anchored Lateline and 7.30. She also wrote a column for the Bulletin magazine. At the 2007 federal election she wrote herself into Australian political history by defeating sitting prime minister John Howard in the seat of Bennelong. Maxine lives in Melbourne, where she is involved in a broad range of activities, including directing three not-for-profits: Per Capita, Playgroup Australia and the John Cain Foundation. 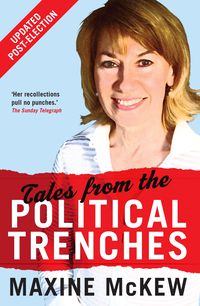 Tales from the Political Trenches Updated EditionMaxine McKew
Paperback$24.99
Free shipping
on orders over $50
Get 10% off
when you sign up as a member
Buy now from Australia's
Oldest university press
