In a career spanning more than forty years, Patricia Edgar has been an educator, an activist, an author, a media regulator, a television producer, and a leader in the media industry.Dr Edgar was instrumental in the establishment of the Australian Broadcasting Tribunal's Program Standards for children's television. However, she is best known as the founding Director of the Australian Children's Television Foundation.Her books about television and the media include Children and Screen Violence, Under Five in Australia, Media She (with Hilary McPhee) and The Politics of the Press.Dr Edgar lives in Melbourne with her husband, author and social researcher Don Edgar, near her two daughters and four grandchildren. She is chair of the World Summit on Media for Children Foundation. A breast cancer survivor, she also chairs the Breast Cancer Network of Australia. 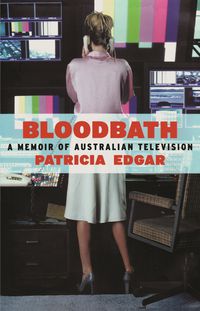 BloodbathPatricia Edgar
Hardback$45.00
Free shipping
on orders over $50
Get 10% off
when you sign up as a member
Buy now from Australia's
Oldest university press
