Emeritus Professor Paul Boreham is a former Deputy Director and Director of Research of ISSR (retired July 2012) and was Co-director of the UQ Social Research Centre—a precursor of ISSR. He was also Head of the School of Political Science and International Studies. He has held visiting appointments at the London School of Economics and Political Science, the Organisation & Employment Studies Group at the University of Manchester; the Department of Sociology at Carleton University, Ottawa; the Department of Politics at the University of York and the Centre for European Employment Research at the University of Strathclyde. His research on employment and labour market analysis and social and economic change has been supported by 20 Australian Research Council and 25 other national competitive grants worth in excess of $8million. It has been published in eleven books and more than 120 journal articles, chapters and research reports. 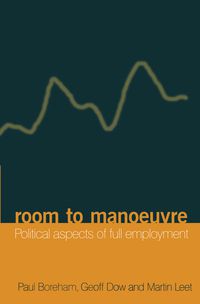 Room To ManoeuvrePaul Boreham, Geoff Dow, Martin Leet
Paperback$35.00
Free shipping
on orders over $50
Get 10% off
when you sign up as a member
Buy now from Australia's
Oldest university press
