Peter Edwards is an honorary professor at Deakin University, Melbourne, and a visiting professor of the University of New South Wales at the Australian Defence Force Academy, Canberra. He is the official historian and general editor of the nine-volume Official History of Australia's Involvement in Southeast Asian Conflicts 1948-75, including his volumes on strategy and diplomacy, Crises and Commitments (1992) and A Nation at War (1997). 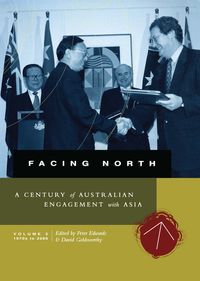 Facing North Volume 2David Goldsworthy, Peter Edwards
Paperback$39.99
Free shipping
on orders over $50
Get 10% off
when you sign up as a member
Buy now from Australia's
Oldest university press
