Robin S Corfield is a well-respected military historian who specialises in Australian Infantry battalion histories. He became interested in Fromelles during his work on the 57th and 60th Battalion history, and discovered many discrepancies in the published material and official records. Later work on the 58th and 59th Battalion's history caused him to ask more questions.In 1994, at the beginning of the project he 'walked' the battlefield, later going to the Public Records Office in London to study the papers of the British brigades and battalions at Fromelles. At the Australian War Memorial in Canberra he researched the Australian records. Then 'with some idea of the event' he met survivors, read letters, diaries, books, organized translations of German accounts, listened to tapes, conducted interviews, traced relatives, argued with historians, and constructed the Rolls of Honour and the list of prisoners. This research sparked the interest in Fromelles and eventually led to the discovery of the mass graves in France. 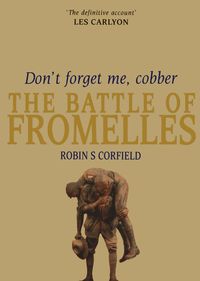 Don't Forget Me, CobberRobin Corfield
Paperback$49.99
Free shipping
on orders over $50
Get 10% off
when you sign up as a member
Buy now from Australia's
Oldest university press
