Sir James Gobbo's parents migrated to Australia in 1938 when he was seven. He was educated in Melbourne and at Oxford University, where he was Victorian Rhodes Scholar for 1952 and President of the Oxford University Boat Club, rowing in the crew that won the 100th Oxford-Cambridge Boat Race.

Sir James was honoured with a knighthood in 1982 for services to the community. He was again honoured for service to the law, multicultural affairs and hospitals by the award of Companion of the Order of Australia in 1993.

Sir James's current positions include Chairman of the Council of the National Library of Australia and Chairman of the Australian Multicultural Foundation. He is a Vice President of the Order of Malta, which is involved in the provision of home-based palliative care in Victoria through Eastern Palliative Care (EPC). 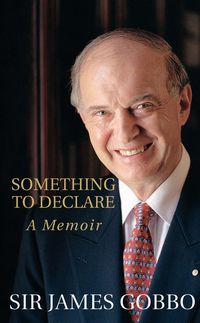 Something To DeclareSir James Gobbo
Hardback$59.99
Free shipping
on orders over $50
Get 10% off
when you sign up as a member
Buy now from Australia's
Oldest university press
