Tony Abbott has been Member for Warringah since 1994, and was Leader of the Opposition from December 2009 to September 2013. During the last Coalition government he served as a parliamentary secretary, minister, cabinet minister and as Leader of the House of Representatives.
Abbott holds a Bachelor of Economics and a Bachelor of Laws from Sydney University and a Master of Arts (Philosophy and Politics) from Oxford University, where he was a Rhodes Scholar. Before entering Parliament Tony Abbott was executive director of Australians for Constitutional Monarchy and press secretary and political advisor to Dr John Hewson when he was Leader of the Opposition. In his previous career as a journalist, he wrote features for The Bulletin and The Australian. Tony Abbott lives in Forestville with wife Margaret and three daughters: Louise, Frances and Bridget. 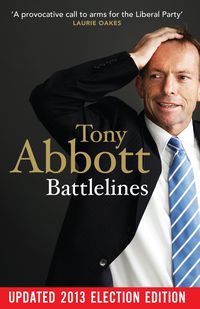 BattlelinesTony Abbott
Paperback$24.99
Free shipping
on orders over $50
Get 10% off
when you sign up as a member
Buy now from Australia's
Oldest university press
