Born in St Kilda in 1919, Sir Zelman Cowen's contributions to public life have been many and varied. Sir Zelman enjoyed an outstanding student career in Arts and Law, and at 19 became the youngest tutor in the history of Melbourne University. Chosen as Rhodes Scholar for Victoria in 1940, he served in Naval Intelligence during World War II. After the war, as a Fellow of Oriel College, Oxford, he was Vinerian Scholar for 1947, and was awarded the degree of Bachelor of Civil Law. As Professor of Public Law and Dean of the Faculty of Law, University of Melbourne, from 1951 to 1966, he presided over a revolution in Australian legal education, characterised by the use of full-time teachers, the introduction of the American case-book system and closer ties with outstanding American law schools. In 1968 he was awarded the degree of Doctor of Civil Law. After a decade as Vice-Chancellor of two universities, the University of New England and the University of Queensland, he was appointed Governor-General of Australia in 1977, a post he held until 1982. He regards this period as the great experience of his life. Provost of Oriel College, Oxford, from 1982 to 1990 and Chairman of the British Press Council from 1983 to 1988, Sir Zelman returned to Melbourne in 1990 where, among other pursuits, he was Chairman of the John Fairfax newspaper group from 1991 to 1994. His most notable publications include Federal Jurisdiction in Australia (1959), Isaac Isaacs (1967), The Private Man (1969) and Individual Liberty and the Law (1975). Sir Zelman maintains a lifelong interest in the arts, especially music. 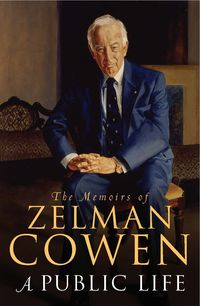 The Memoirs Of Zelman CowenZelman Cowen
Hardback$59.99
Free shipping
on orders over $50
Get 10% off
when you sign up as a member
Buy now from Australia's
Oldest university press
