Read Lady Cowen's speech from the launch of her diaries

My Vice-Regal Life brings us Lady Cowen's diaries from her time as wife of Governor-General Sir Zelman Cowen.

With My Vice-Regal Life, Lady Anna Cowen brings us her diaries from her time as wife of Governor-General Sir Zelman Cowen.

While Lady Cowen was initially hesitant about taking on this role, she came to embrace it. Her record of this time of her life makes for an engaging read and provides insight into the day-to-day life and formal duties of the role. The book was launched on 28 June at Raheen. Lady Cowen made a speech at the launch which she has kindly allowed us to publish here.

My very warm and sincere thanks to Jeanne Pratt for her generosity in hosting this occasion, and to Louise Adler for a handsomely produced book which was never intended for publication. 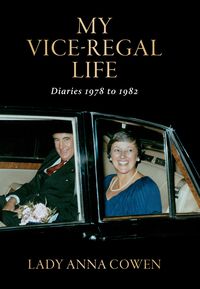 I understand that the Hon. Josh Frydenberg, MP., is performing his second book launch for the day, having this afternoon sent afloat an important political work. So I must congratulate him on his stamina and goodwill. He is a long-standing family friend and now heads a ministry with heavy responsibilities. That he has taken time to add this to his load moves me greatly.

Having someone read one’s diary used to be considered an invasion of privacy. However in this instance I am pleased to think they may assist in providing an insight into a rarefied world.

I kept these diaries in order to retain events which might be otherwise lost to memory. I had previously kept travel diaries which had served this purpose, so I felt that the hugely exciting venture Zelman was about to undertake, with me alongside, warranted at least equal treatment. I have to say that re-reading them now gives me pleasure. It is with at least a little trepidation that I hope you might find them of some interest.

When I reflect back to that time, I recall that my emotions were at least a little mixed as speculation swirled as to who might succeed Sir John Kerr as Governor-General. The list included a cast of characters, but it did not include Zelman – both to my relief and indignation!

Zelman’s term in the Office of Governor-General ran for almost five years, and it was marvellous experience. It began in the aftermath of a Constitutional Crisis which had deeply divided the Australian community. In this environment Zelman accepted the role. He hoped, he said, quoting the Indian Prime Minister Nehru in other circumstances, to bring a “touch of healing”.

The announcement of his appointment had been received overall with general and widespread approval. He was known as a “public intellectual”, and was not politically aligned. He was a talented communicator and he loved public life. In short he was a “natural” (in my opinion anyway) for this job at this time. Again and again I am struck in re-reading my diaries how much I enjoyed watching him perform on this stage – and how well he did it. In fact, this was one of the highlights of this time for me.

For the family however, there were low-lights or drawbacks. While our two older sons in their twenties were out of the nest as it were, our two youngest, at 18 and 11, had their lives seriously disrupted, which I regret. I was enjoying a fairly private life and had little taste for public exposure.

“
I was enjoying a fairly private life and had little taste for public exposure.”

Zelman was a natural born communicator who enjoyed public life and he was delighted to accept this new appointment depending on my agreement. While I did not welcome the offer, there was no way I could not agree to it without occasioning bitter disappointment.

So Zelman, a biographer of Sir Isaac Isaacs, the first Australian-born Governor-General, found himself in a post he well understood.

I was now in a role in which had no rule book and in which I was “learning the job”:

I was on a learning curve I came to enjoy very much. A rare and remarkable opportunity to get a comprehensive overview of our large and wonderful country, and much of the activity going on within it. A huge privilege. Reviewing it now, some 35 years after Zelman’s term ended, I can only express wonder at the hand fortune dealt us.

At the time, unwilling to let this experience get lost to memory, I embarked on the diaries. It became a habit to pick up a foolscap pad and record the events of the day, or catch up on two or three days I may have missed. It became a regular habit and allowed me observations and reflections, which I enjoyed making.

When he left office in 1982 Zelman was fortunate to retain the services of his excellent personal assistants – Lyn Curtis and Honorina Sihin, who typed my 15,000 pages of foolscap and reduce them to 12,000 beautifully presented pages. These went into 3 large folders and came to reside peacefully for many years in a cupboard in my laundry.

Enter Hanna Baum, a journalist, who got wind of this stash, and insisted it be brought to the attention of Louise Adler, of Melbourne University Publishing.

After a period it was considered to be of interest, and editors went to work to reduce it from over sixty thousand words to the twenty thousand or less sensible readers consider enough.

“
I have dedicated this book to Zelman, my loving partner of 66 years, and to Ben, my much loved youngest child who died tragically this year.”

I have dedicated this book to Zelman, my loving partner of 66 years, and to Ben, my much loved youngest child who died tragically this year. Ben loved life and took a great interest in any military component of the governor-generalship. He accompanied me in 2015 to the de-commissioning of HMAS Tobruk which I had launched in 1980. I treasure a snapshot of Zelman and Ben – both in fatigues – both ends of the Australian Defence Force – a schoolboy cadet and the Commander-in-Chief.

I have often stated that I have lived a charmed life, save of course for the heart breaking loss of Ben, and even now I cannot think of a better way to describe it. For Zelman, his time in this Office was career-defining, and I think it is fair to say the pinnacle of his life. But for me it was more of a continuum spent alongside a husband wherever his career took us.

I have often been asked how this life in Office changed me, and I really have found it hard to identify many ways in which it did – save one. Whilst previously I had been conscious of time and timetables, I tended to be rather relaxed about being punctual. It wasn’t until one occasion in the early days of living in Government House that I noticed traffic banked up at intersections waiting for us to pass, that I knew I had to redouble my efforts. Punctuality became essential in a life governed by orders.

Once again I have to express my appreciation of the efforts of all those who have contributed to the production of this beautiful book. I cannot name them all because beyond the editors, Cathy Smith, Joanne Hollyman and Sally Heath, there are many with specialist qualifications with whom I am not familiar. So in thanking the redoubtable Louise Adler I include all those who work in her team. Thank you all again.

And I thank all of you who have come tonight to join me on this occasion.

My Vice-Regal Life is out now.